It makes me mad when… 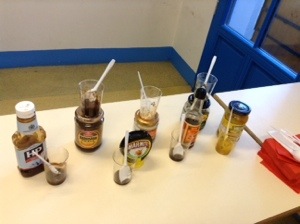 I spend (relatively) ages thinking of a fun way to introduce the passive and my pupils just won’t play ball.

For some reason my pupils always seem to find the passive challenging ( answers on a postcard please), even though some of them are far from active themselves!

So this time I thought long and hard about a lure, a hook, to grab their interest.

A good look in the fridge gave me the solution. I organised a tasting of a few of my favourite relishes and a worksheet to fill in, ” I think it is made of… I would eat it with… After this part we would chat about their favourite sauces, and I would subtly move the conversation to asking what they liked on pancakes, enabling me to use the text on maple syrup from the course book to help them “notice” the passive.

Fantastic, I thought. Which is probably why I was so miffed when five of the girls just refused to taste anything. I admit the marmite wasn’t particularly appetising but even so.

I was actually quite surprised to see how annoyed I was about it, after all my pupils aren’t always leaping with enthusiasm. Thinking about it afterwards I finally saw their point of view, not everyone is going to want to blind test some funny looking (and smelling sauces). It was a shock to realise how I hadn’t thought of things from their side at all during the class. Also the pupils don’t have any idea of what goes into lesson prep, nor should they, so I mustn’t blame them for what I saw as their ingratitude.

Fortunately I gave the same lesson to another class of the same level later in the day. This time when I set up the activity I immediately offered an alternative activity to those who didn’t want to participate, although I made sure it was much more boring, I’m not that nice!

Has anything surprised you by making you mad when you weren’t expecting it to?

1 Response to It makes me mad when…